MurdocK
In a uniform from the age of 13 to 30, learned much of 'military life' and after a decade of travel have settled down to start a family. Started with boardgames and RPG's in the 1970's and added tabletop miniatures in the 1990's. Now with a family of three boys, seeking to turn this sometime hobby into more of a lifestyle.

"You are certain that the messengers were intercepted?"
Count Viacheslev Boyarisov demanded.

"Yes, Excellency."
Came the answer just over a whisper from the shadowy figure at the far end of the room, where no light would fall from the candles.

"Good." Turning to gather his hat, the Count continued, "And the replacement couriers?  With their messages?"

"Also completed, Excellency."
Again the answer just above a whisper.

"Bring the response from the Court in St. Petersberg to me the moment you have it.  I shall be in Borisov within a fortnight and plan to co-ordinate from there until the first actions make clear where I may need to travel."
The Count put his hat on and slapped his gloves as he collected them from the table.  Turning back to the dark end of the room as though to speak again, Count Boyarisov did not see the shadowy figure any more.  Scanning to be sure he was gone, the count then left his Moscou residence, with the plan to only return in triumph.
Posted by MurdocK at 1:31 PM 3 comments: 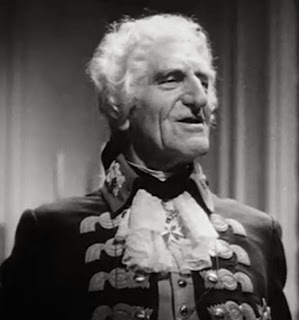 "Simply put, this situation is not acceptable."  Said the western region Minister for Munitions.

"The forces were deployed so as to obtain victory for the Tsarina, and not the personal ambitions of this Boyar lordling."  The Minister was most displeased, though he did not want to place this out into the hands of the Imperial courier.

"I shall draft a letter regarding this to the Tsarina this evening, for now you may stay here with us.   Have the steward see to the Prince's needs and we will dine together tonight."  The last part for his own secretary to carry to the Steward.

"I retire now to contemplate how to properly phrase this note for her majesty."  as he turned and left the salon.
Posted by MurdocK at 11:41 AM 2 comments:

What happens when a greater power crosses over a lesser power

Coming from a discussion on Emperor vs. Elector:

"What happens when a 'greater power' seeks to cross the territory of a 'lesser power', such as Mieczyslaw?

1) obvious, your army is absorbed with good effect into the larger one.

2) your army is absorbed, with suitable compensations (or promises thereof) such as lands and or titles perhaps cash payouts.

3) some 'negotiations' may be taking place just before the crossing, ambassadors will be sent with the gifts and other promises for the safe passage ... though the threat of crossing without warning will be ever present. If negotiations go well, then your little place may be spared conscription - possibly even make out with some good booty. If they go poorly, then the fate #4 will be the result.

4) Forced crossing, with little warning and conscription along the route. If any forces are assembled to stop them they will be harshly dealt with. Most likely your forces will have to fall-back out of the travel route or, if your only fortifications are on the route, then into the fortifications to politely await their passage.

5) best bet is to flee with your mobile army into the opposing camp, get your little force out of harm's way and fortify your hard points, if you have any fortifications, garrison them and flee. Any attempt to stand against such a large force that considers you the enemy will only result in your destruction. IF you have a fortification far from the most likely route then you may consider holing up there ... however you will likely be fore fitting your alliance with the other 'allied' nation (empire etc.)

What are your thoughts?
Posted by MurdocK at 1:45 PM No comments:

Report from the front ...

Anton read slowly again the report from the front line, written by his middle son:

"We have been pushed back from crossing the river.  Losses were heavy with many battalions now at less than one-quarter effective.  There are no hospitals and no succor for the wounded.  This situation is even worse that uncle Boris told me.  The Boyars are intent on killing us all for their own gain here in Mieczyslaw.  They will not be satisfied until every one of us is dead and the general does not hear any entreaties to use our force more effectively.  It is as if he will only hear Count Borisov and no others."

The letter was stained with mud.

The Boyars appear to have put personal ambition ahead of the plans that were presented at court to the Tsarina ...
Posted by MurdocK at 1:57 PM No comments:

Fellow ImagiNation ... in the same sphere

Rittmeister Krefeld's Kleinkriege, a blog that takes on the same territorial subject matter as the Duchy of Meiczyslaw.

There are a number of excellent flags and the author is telling stories of the southern regions of Lithuania-Poland, in their battles with the Turks.
Posted by MurdocK at 2:39 PM 1 comment:

The combined Russian-Boyar force pressed towards the Pultusk bridge and ford of the River Narew.

In defense Mieczyslaw battalions had been assembled with light guns to hold the bridge and ford region.

These battalions were set to cover the ford, as this area was the only one large enough to permit large troop formations to cross.

The artillery was set up to make crossing the bridge, a narrow space, impossible for infantry formations.  One battalion was deployed into skirmish, while the other was in line, well back from artillery range at the river.

Boyar and Russian brigades arrived, Boyar troops were tasked to cross the bridge, while the Russian columns pressed into the ford gap in the marshy ground.

The Boyardvina brigade pressed into the bridge right away, the leading brigade failed to charge home.  They were promptly blasted by the Mieczyslaw light gun battery. 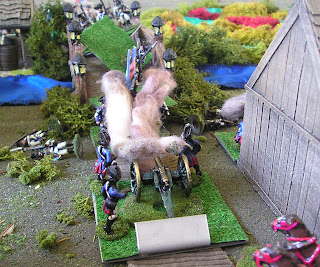 This column stayed on the bridge and pushed for charging again, again they failed to proceed into the target.  Now the skirmish line had begun firing, the column had taken on 25% casualties at this point and they were finally routed off of the bridge. 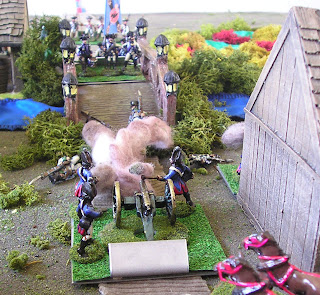 Meanwhile at the ford, the Russian brigade had set up their guns and had infantry columns moving up ... 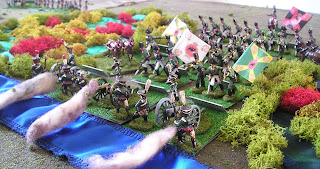 No further delay could be accepted by the Russian commander, watching that the Boyars were thrown off the bridge by the Mieczyslaw artillery, the time for the crossing was now. 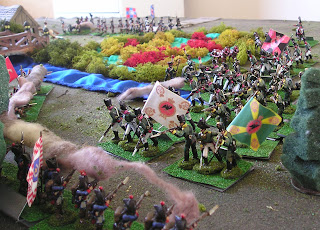 It was the rush across the river that saw the death of the Russian Brigadier, his loss was enough to cause a loss of confidence in the zeal of the columns. 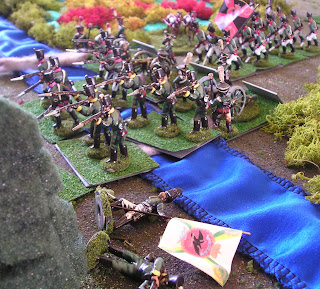 That loss of zeal, ended the charge.  The columns were pushed out into ragged lines, while a fresh column was prepared to move forward.  Through all of this the Mieczyslaw lines (now the skirmishers had been reformed into line), were delivering volley after volley into the Russians.

The whole Russian-Boyar army now was fast approaching the 25% casualty rate. These ragged lines now began to lay down volleys of their own.  Now the Mieczyslaw army was taking casualties, pushing them close to the 25% level.  The Russians had one fresh column - this was to be the victory trump card. A gap was made in the Russian firing lines, they charged just as the two firing lines collapsed. 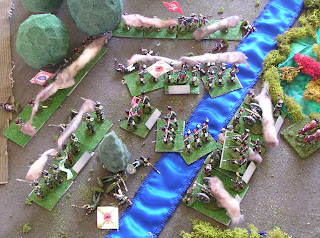 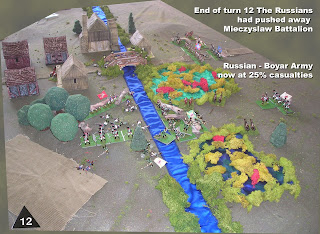 The Mieczyslaw charge was successful, the Russians did not stick around to fight it out and fled back across the river in a total rout. 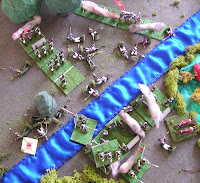 This now put the Russian-Boyar forces at 25% (morale check level), and the Russian commander was hard pressed to keep the battalions from fleeing... 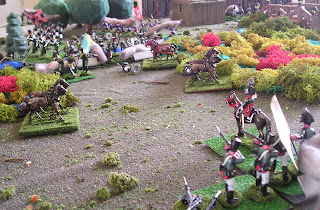 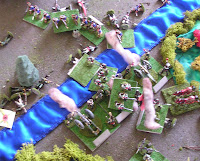 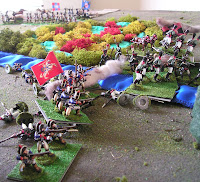 The Boyar brigade (seen in the background, distance to the left) was all that the Russo-Boyar army had left to get across the river.

One more push at the Pultusk bridge is the order for the Boyar battalions.  At nearly 50% casualties for the first battalion, the prospects for the second assault are not good...

Never-the-less the order is given, the forward line of infantry forms into column to advance on the bridge. 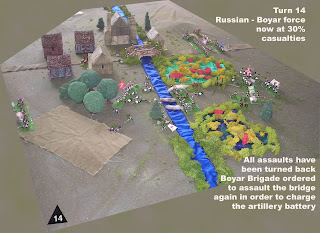 While the Boyardvina troops moved into column, the Russian commander was hard pressed to keep his troops present, while at the end of every turn the whole army was checking against retreat as now the casualties had reached 30%.  Meanwhile the Mieczyslaw battalion had been rallied (only just on the 2nd - final! - attempt) and was now moving back into position.

The other battalion was strung back out into skirmish order as the Russian artillery resumed firing. 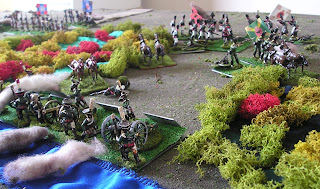 Without surprise, the Boyar attack across the bridge was repulsed.  The initial charge failed, pummeled by artillery the column again remained to 'try' a charge again.  The second attempt also failed.  That battalion took 50% casualties driving the Boyar force to 50% casualties and the total army to 40% casualties. 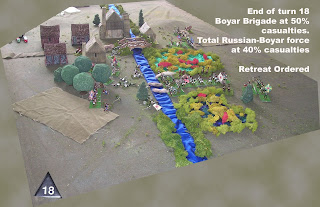 This was too much for losses, the army failed the morale check after that rout from the bridge. 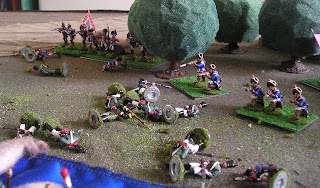 Pultusk bridge was held against odds of 2:1. 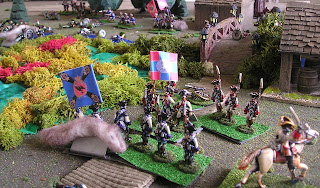 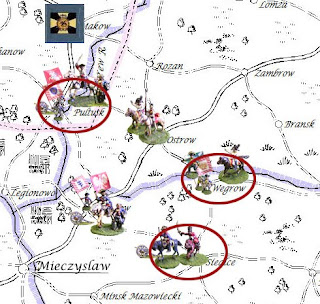 With the Cossack breakthrough the defenders of the Duchy had to respond.

Moving the horse to overcome the Cossacks, then filling in the lines along the river.

Just in time as the Boyars have moved to press on both flanks ...